If you’ve followed our strategy for setting your wedding priorities, you should have a rough idea of how large or small your wedding will be, so now it’s time to get specific with your guest list. This doesn’t have to be overwhelming – we have eight tips to help you cross “guest list” off your to-do list! 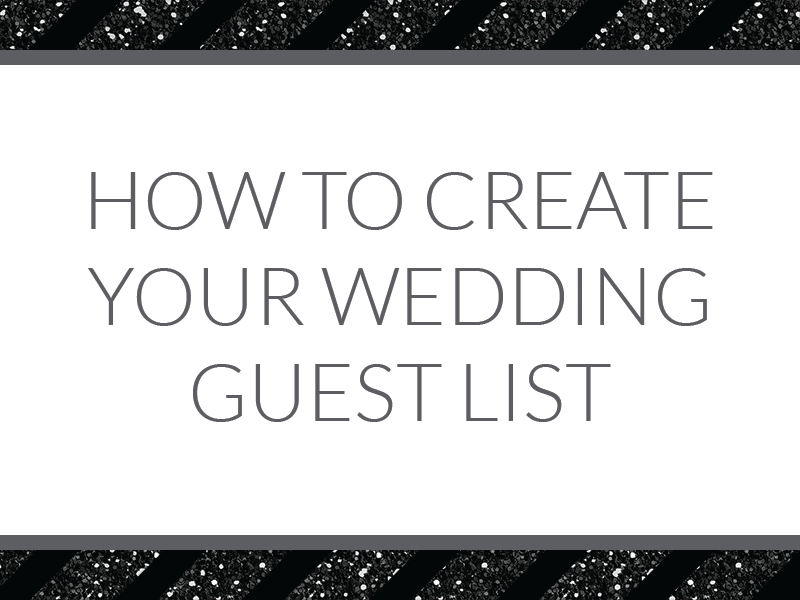 Remember to be clear and consistent, and, most of all, remember that you’re celebrating your marriage – you and your fiancé should be happy with the decisions you make.

Think about “sets” of possible guests

Sets can be people from work, college friends, relatives, and so on – if it would feel weird to invite person A without inviting person B, treat them as a set. They both get invitations, or neither one does.

It’s your wedding, and you can invite whomever you want. If you want to go through your family tree and only invite the relatives you like best, it’s totally up to you – anticipate that someone will question or challenge your decision, and if you don’t want to deal with that, consider expanding to all of that set or, conversely, none of that set.

Plan to talk about your parents’ guests

People always say “if your parents are paying, they get to decide” – we don’t entirely agree. Yes, if your parents are generously footing the bill for your wedding, it’s polite to ask them if there’s anyone they’d like to have added to your guest list.

Before you do this, think about how you and your fiancé would feel in a variety of situations: What if your parents say they want to invite a few work colleagues? Or 100 of their friends? Maybe the people they’d want to invite are people you’ve never met, or people you have met but disliked – what’s your comfort level with these scenarios? If it really came down to it, would you prioritize your family’s financial support of your wedding or your desire to control the guest list? You’ll hopefully never have to find out, but it’s better to be prepared!

Then, you can go into the conversation knowing where you draw the line. If you’re not sure how that conversation will go, practice different phrasings with your fiancé (or a close family member). Rather than asking “hey, want to invite anyone to my wedding?” you might ask “are there people you think I should invite?” or a similar question, something that focuses the attention on their “must have” guests, rather than a list of random acquaintances.

There are no “right” answers about whom to invite, so your guest list decision rule can be anything. For S and me, it came down to who we’d be upset to not have with us on the day, should that person be unable to attend. If we’d be disappointed, they were in.

We could’ve gone with “people with whom we’ve interacted in the past year” or “people we want in our lives going forward” or other criteria, but this particular approach worked for us. Talk to your fiancé, and come up with something that feels right for you as a couple.

More specifically, S and I decided to invite only our immediate family (parents, siblings, parents’ siblings) and close friends. I didn’t expect how many well-meaning people would inquire about the wedding, resulting in me feeling like I needed to explain the situation (that is, why that person wouldn’t be getting an invitation). Don’t feel like you need to defend your choices, but do consider what you’d say in such a situation. If you’re comfortable with your decision rule, it’ll make a potentially awkward situation go more smoothly.

Be consistent with kids and plus-ones

Whether or not to invite kids, and whether or not to include plus-ones, should be part of the decision rule you establish. Consistency is hugely important here, and will go a long way toward preventing hurt feelings later.

Do you and your fiancé want to have children at your wedding? If so, make a list of how many kids you’d be including and their ages. It’s perfectly acceptable to only invite kids over a certain age, but before you make that call, look at how many kids you’d thereby be including or excluding. It might be easier to invite all of them, rather than excluding the two under the age of 10 and inviting all of the older kids.

Lists will also help you figure out what to do about plus-ones. If you’d invite two people individually, you don’t need to write them down; this list is for people who would only be invited because of their relationship with your friend or family member. At this point, couples often invoke one (or both) of two rules – is the relationship serious, and have we met this person? For our guest list, S and I considered both, but the answers were almost always both yes or both no, which made the decision simpler.

Plus-ones also matter for your single guests – how many unattached guests are you inviting? If your wedding will be overwhelmingly couples and just a few single people, you might offer them a plus-one, especially if they don’t know many other guests.

It’s never impolite to extend a plus-one to someone, so if you have the budget to do so for all of your guests, go for it!

You do not need to invite someone to your wedding because they invited you to theirs! Inviting someone to your wedding should never be about reciprocity. For example: S and I were recently invited to attend a third cousin’s wedding. It wasn’t feasible to fly home, given work constraints. I was sorry to have missed it, as Steph said it was a great time, and I hear my father was involved in an epic dance-off with his cousin that mostly involved pointing and shuffling (which would’ve been amazing to see).

Anyhow, my cousin invited his whole extended family – that was that couple’s choice. Did I feel guilty about not inviting them to my wedding when I received their save-the-date? I did not. Why? Because S and I made a rule and stuck to it – immediate family and close friends, only.

To be clear – this is not about having a “B” list of people whom you might invite, should people on the “A” list be unable to attend; despite how frequently people seem to suggest this as a strategy, we think it’s in poor taste.

Your “yes” list includes the people you’re definitely inviting, no matter what. In the early stages of planning, it’s useful to think about a “maybe” list, as well. These are the people you’d like to invite, depending on final decisions about venue and budget. S and I knew we wanted to have a small wedding, and were initially interested in a few venues that would hold about 50-60 people, as well as some that would easily accommodate a larger (75-100 person) guest list. So, we agreed that, should we choose one of the larger spaces, we’d expand our list to include our cousins, for example.

Once you’ve both arrived at your “yes” list, count everyone up – S and I put together a spreadsheet with a column for “bride,” “groom,” or “both” (to make creating our seating chart simpler in the future, we added designations like “bride: college friend”). We were pleasantly surprised to see almost exactly one-third of our list in each category, so it worked out beautifully.

It may not be possible to split things evenly, of course – if one of you comes from a huge family and the other does not, it’s time to talk about whether you’ll each “claim” an equal share of the guest list. These situations can be made more complicated when the smaller family is footing most of the bill – now is the time to have these conversations, and you may want to include your parents, as well.

The most common budget-saving advice is to cut your guest list. Yes, it’s true that your reception – which involves per-person costs – will probably be the largest budget item for your wedding. But! It’s not quite as simple as “cut your guest list in half, cut your budget in half.” The only expenses that you’ll actually cut in half are the per-person costs – namely, food and drink, but also invitations, favors, welcome bags, and so on.

Scaling back the size of your list may also allow you to save money by moving to a smaller ceremony space, by renting a smaller vehicle for guest transportation, and so on. Other big expenses, like attire and wedding rings, have nothing to do with the number of guests you have, so those won’t change.

This couple spent $10,500 on their wedding – $5000 on the reception, $5500 on other expenses. What would happen if they halved their guest list? The total cost, assuming the same per-person rate, would be $6500, a 24% savings. What if they doubled their guest list? They’re now up to $15,500, about a 50% increase. Yes – changing the largest item in your budget will matter for your bottom line, but no, it’s not as if you automatically save a ton of money by cutting your list.

Navigating the etiquette around guest lists can be tricky, so send us your questions! If you’ve used these tips to create your list, we’d love to hear about it – leave a comment below! 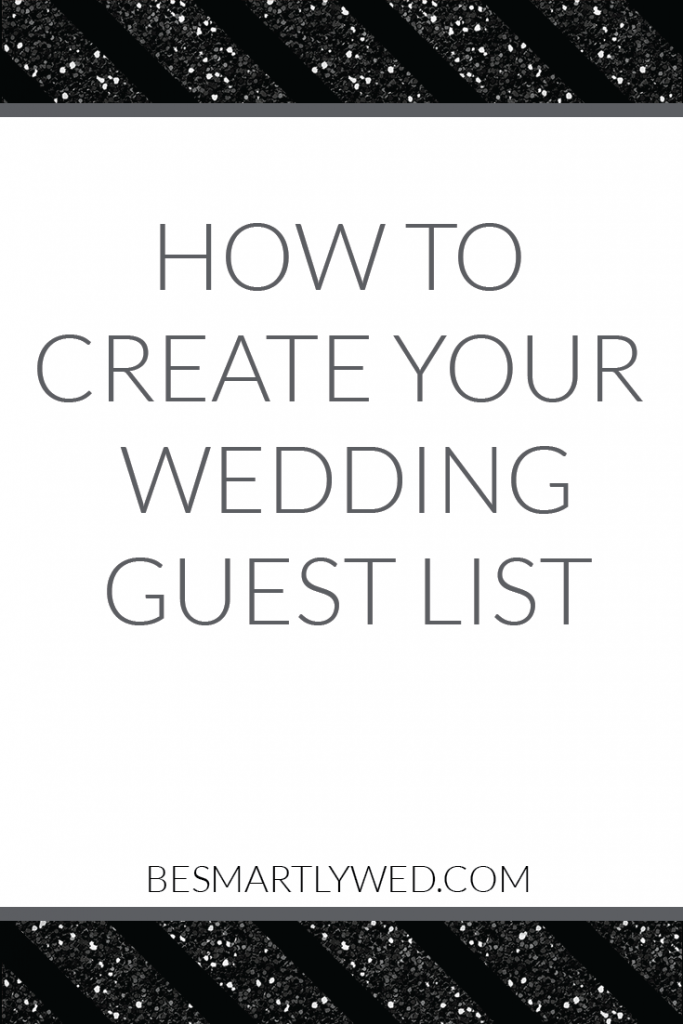 Previous Post: « How to incorporate books into your wedding day
Next Post: Wedding inspiration for Philly sports fans »