A number of companies offer beautiful dresses available to rent for a few days at a fraction of retail price – it’s incredibly tempting to rent these for your wedding, for a rehearsal dinner, engagement shoot, or as a bridesmaid’s dress.

There are several issues you could run into when renting a special occasion dress – what if it doesn’t fit? What if you don’t like it? However, neither of us have seen much discussion of another outcome – what happens when your order gets cancelled just before your event? As I learned last week, quite a bit of frustration and wishing you’d planned for the possibility! 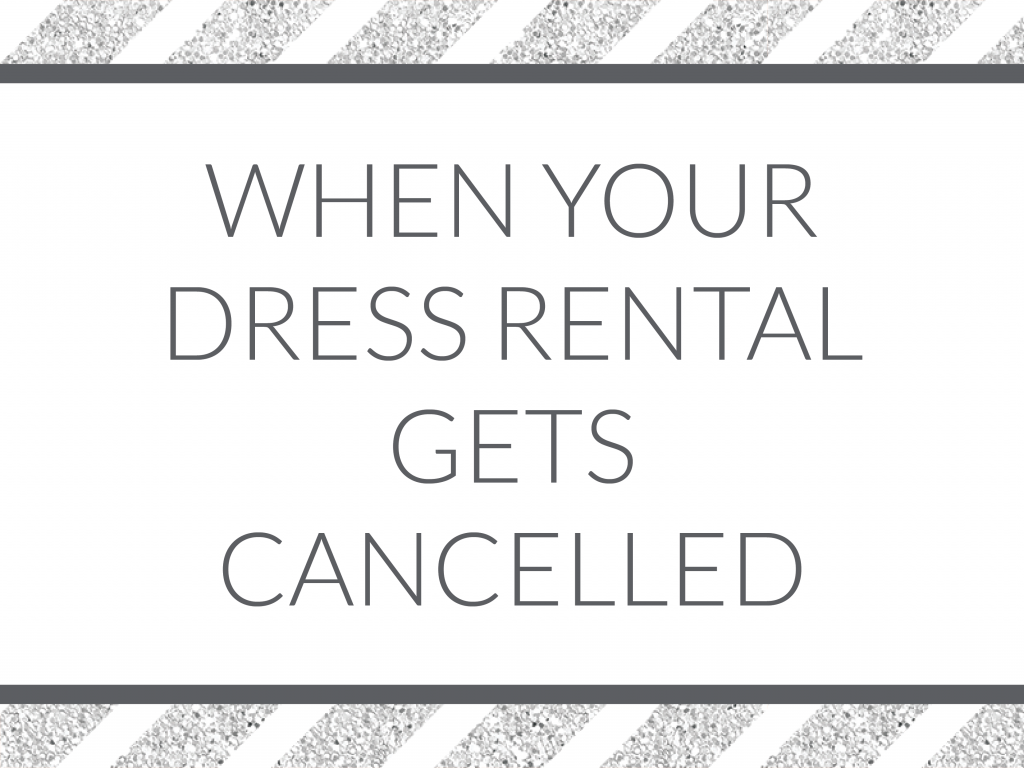 To be very clear – this is not an indictment of Rent the Runway, nor of their customer service, which has been very responsive. Steph has rented from there a number of times without ever running into trouble, as have I, and I also rented a nha khanh dress for a day-before-rehearsal dinner with S that arrived without issue (though didn’t fit incredibly well – the 12 was too fitted for my liking, and the 14 was significantly larger than the 12; although it’s not listed as a 14W, I think it must be).

Both Steph and I still recommend Rent the Runway, but we thought it was important to share my experience as a cautionary tale. I simply hadn’t considered what would happen if the things I planned on having for my wedding didn’t show up.

How Rent the Runway works

If you’re not familiar with rental options, you can reserve RTR items four months in advance of your delivery date (which, they recommend, should be set 1-2 business days before the actual event). Many months ago, I found the perfect outfit for my wedding rehearsal (a Badgley Mischka jumpsuit with a sequined top) and, when it was finally four months before the day before the rehearsal, I ordered it. I ordered the size I knew I needed, plus a (free) backup size, along with the Kate Spade Bride2Be clutch. All three were set to be delivered the day before the rehearsal (that is, last Thursday).

What happens when your rental gets cancelled?

While finishing packing for the wedding last Wednesday, a few hours before heading to the airport, I received two e-mails telling me the jumpsuit in my most-needed size, plus a pair of earrings I’d separately ordered to wear with it, were unavailable. RTR doesn’t get into specifics; they’ll say it’s either due to a late or severely damaged return. I don’t know which is more common, though I’d put money on it being a late return. Some of this may be the fault of customers – they now charge $50 per item, per day late, which may not even be enough of a dis-incentive – and some of it may be the fault of carriers (e.g. for weather delays). I also don’t know how much of a buffer RTR puts between orders – presumably, at least enough to get items dry cleaned and shipped out and back – but it wasn’t enough in my case.

I was offered the opportunity to cancel my order and receive store credit, or to get a new item up to twice the original rental value. If you don’t reply in time (usually about two hours after receiving the e-mail), they’ll ship you a “comparable” item. The second option, though tempting, comes with a huge limitation: How many things will you find in your size a day or two before your event, particularly if you’re renting at a busy time of year? And how many of those available options would you actually want to wear?

In my case, the answers were “very few” and “almost none,” respectively. I called to talk to a Rent the Runway stylist, and told her about my wedding rehearsal – I needed the outfit for the next day, wanted something that was dressy but not black tie, and wanted it to be seasonally appropriate (e.g. darker colors). She offered to put together a board of options in the next 20 minutes, and when I logged onto my account, I saw 39 different items. Unfortunately, almost all of them were formal gowns – far too dressy for my rehearsal – and most of the others were out of season (e.g. colors or fabrics that wouldn’t have been appropriate for a December night in Philadelphia).

I asked (pleaded, really) if it was possible to even take delivery of the jumpsuit I wanted for Friday, and was told it wasn’t. The stylist to whom I spoke was sympathetic and friendly, but couldn’t make a dress appear magically. We eventually found one Marchesa Notte dress I liked, and Rent the Runway agreed to overnight ship the dress (in the size I wanted, plus a backup size) to me at my hotel, so I’d have it the day of the rehearsal.

Later that evening, I received another e-mail telling me one of the sizes of that dress (the Marchesa Notte) was also unavailable. Ugh. They overnighted a “similar” style selected by the stylist, as well, to make up for the backup-backup dress being unavailable. I didn’t select that dress; it was added on their end.

The two overnighted dresses arrived at the hotel Friday afternoon, but I didn’t realize they had ever been delivered, so only picked them up the day after the wedding. The navy Marchesa Notte dress didn’t fit, and I didn’t bother trying on the teal dress, which wasn’t my style, nor would it have been something I’d wear to a December event in Philadelphia.

In case you’re wondering what happens if a dress doesn’t fit, I’ve dealt with that issue, too: If you report the issue ASAP (I’ve done so within 24 hours of receiving things), they’ll allow you to return the item (or items) for store credit. They’ll try to overnight you a new item, which is why they encourage you to choose a rental start date at least one day before you need the dress / bag / jewelry / etc.

For those of you keeping score, that makes four cancelled items – the Badgley Mischka jumpsuit (size 14), Kate Spade bag, Marchesa Notte (size 14), and a pair of Kendra Scott earrings – and four shipped items – the Badgley Mischka jumpsuit (size 12), one alternative dress I selected, and two alternative items they selected for me.

I was refunded in full for the earrings and the bag, but not for the jumpsuit, as they did send the size 12 (which fit perfectly everywhere except the chest, and wouldn’t zip up). It was beautiful, and I very much would like to wear it at some point in the future.

What I actually wore for the rehearsal

I went to bed Thursday night kicking myself for not packing even a basic black dress; S and I were already checking three suitcases full of wedding things, plus our carry-ons (which included my wedding dress), so I decided not to bring anything I didn’t absolutely need. At the time, I didn’t see a reason to pack clothes or a bag for the rehearsal, as I had taken care of this by having the rentals sent to Philadelphia (or so I thought).

The story doesn’t have a sad ending, thankfully! Steph kindly braved the cold with me as we ran around Center City looking for something I could wear to the rehearsal and rehearsal dinner. As time was running out before we had to head back to the hotel, she spotted a white embellished top at Ann Taylor, and I ended up loving it on, so I also bought a pair of ponte leggings to wear, and used the shoes I had brought to go with the rental dress. I worked out perfectly, and I actually received a bunch of compliments on the top. Both my family and S’s family wore dark colors, so I (unintentionally) was able to stand out as the bride in white. And I only spilled a tiny bit of pasta sauce on the shirt (I’m clumsy, so this was a victory!)

Would I rent from Rent the Runway again? I would, but only if I were more indifferent about receiving the item for the event, such that I could easily sub in something else I owned. I wouldn’t rent for my own wedding, nor for a wedding in which I were part of the bridal party. If this had been my first experience renting, it might’ve made me swear off renting forever.

Rent the Runway stylists were great about helping me find alternatives, and about trying to get me things ASAP. At some point, it is truly out of their hands – if someone doesn’t return the dress you reserve in time for you to get it, or if UPS loses it, or whatever happens – but I would love to see a larger buffer period in between rentals to account for these issues.

I’m not sure how many of each item & size RTR keeps in stock, but something that might help this problem would be to have “spares,” particularly for popular items. Rather than buying, say, three of each size of a popular dress, maybe they buy four, and keep the fourth in reserve, sending it out only to avoid a rental being cancelled.

If the item you’re renting is one you don’t want to go without, you might consider a longer rental period. The Badgley Mischka jumpsuit is currently renting for $50 for 4 days, or $80 for 8 days – had I set a longer rental period, it seems plausible that late return would be less of an issue (damage, of course, is another story).

I’d encourage all renters, too, to be extra-considerate of the return windows – maybe you’re thinking about keeping the dress you love one more day and just paying the $50 fee (though I’m sure RTR wouldn’t appreciate this happening more than once). Keep in mind, however, how that will affect the next person in line for the dress!

Have you rented any outfits or accessories for your wedding, or for an event you attended? What experiences did you have? Let us know in the comments! 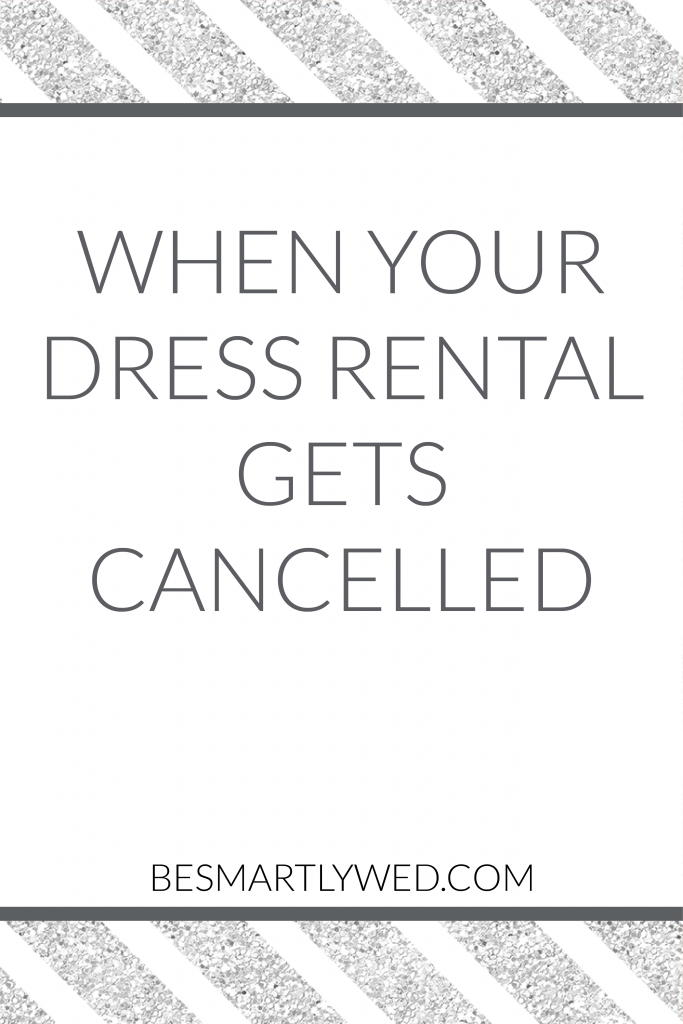